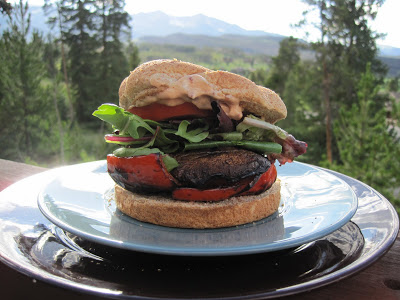 Since we’ve been vacationing in the Colorado mountains where my husband bikes 4-5 hours a day and has already logged over 2000 miles, it appears all he’s in the mood to eat is meat.  I love meat but just can’t eat it more than once a week.

So when he asked me to make a burger the other night before leaving to come home that next day, I said fine but, I wasn’t going to have one.  I decided I’d pick up a large portobello mushroom, a red pepper, lettuce, tomatoes and of course some whole wheat buns to put the burgers on.

I marinated my mushroom in olive oil, balsamic vinegar, fresh minced garlic and red pepper (cut in 1/2 and seeded), then put all into a zip lock baggie.  Prior to doing that I cleaned the mushroom gills. I removed any dirt or debris that might have lodged itself in them.

Note: When cleaning mushrooms just use a damp paper towel.  Never wash with water since mushrooms will soak the water up like a sponge.  Just wet a paper towel and wipe the dirt off.

After the veggies had marinated for about 1/2 an hour, I placed the mushroom and red pepper on the grill, skin side down.  Once both were cooked to my liking I removed them from the grill and placed them on the bun with lettuce and tomatoes.

In addition, I decided since I had some chipotle peppers in adobo sauce, I thought I’d chop that up fine and add it to some fat free mayo that I had, and combined them.  It made a delicious dressing to put on my veggie burger and to my surprise my husband loved it as well on his burgers.  It had a nice kick to it!  Yes he ate several burgers.  I don’t know how he does it and stays so skinny but, I suppose with all the miles he’s logged on his bike he needs lots of protein and his protein of choice is red meat.

Our meal was delightful, along with some iced cold watermelon that we both love, baked fries and homemade oil and vinegar cole slaw.

A simple and delightful meal. Oh and for dessert I went all out (just kidding) and we had Skinny Cow ice cream sandwiches.  This meal couldn’t have been easier and it was scrumptious!

What’s your favorite burger?  I also adore salmon burgers.  Please share your recipe.  You can never have too many burger recipes!