For years I’ve been looking for a baked beans recipe to make that I like and have yet to find one.  I’ve scoured the internet, cookbooks, and even asked friends, and nothing.  The other day I did make a recipe that I liked but it’s still lacking something.

Have you ever been to Bandana’s BBQ?  I love their baked beans and apparently they use a couple cans of beans and then doctor them up.  If you have that recipe please share it with me, I’d love it.

The recipe that I made the other night was tasty and I’m hoping that they’ll taste that much better when I reheat them after freezing the leftovers.  I combined several different recipes together all very similar but each had something extra added.  I’d like the sauce on this to be a bit thicker and heartier.  One recipe called for adding in ground beef – I opted to leave that out since I wasn’t looking for a meal on baked beans.  Some included vinegar and others bbq sauce or ketchup.  After pulling them altogether, this is what I came up with.

While very tasty I was really looking for the Bandana’s version.  If you’re looking for a homemade or doctored up recipe for Baked Beans you might try these.  However, if you have a recipe like Bandana’s or one that you think will knock my socks off please share it with me.  I LOVE baked beans. 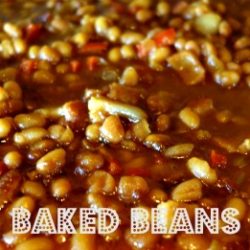 Leftovers can be placed in a container with lid and placed in the freezer.  When ready to serve, defrost and heat slowly so the beans don't get mushy. 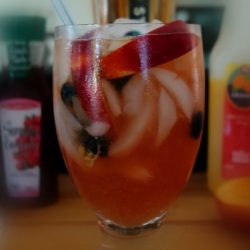