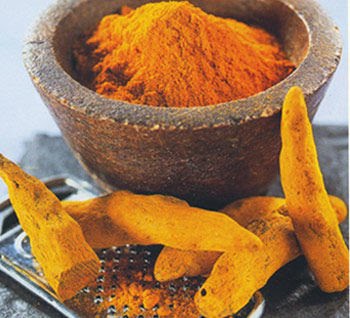 Oftentimes when I’m out running around and lunch time rolls around I’ll stop in at Whole Foods, an incredible health foods market, to pick up some lunch. They have a vast variety of prepared foods to choose from that are so healthy and fresh. I love it.

One of my favorite side dishes that they have is an Israeli Couscous often labeled Cranberry Couscous but I have seen the same dish with other names. I usually get this along with some grilled salmon.

When I first ordered this dish I couldn’t figure out what wonderful flavor I was tasting. It wasn’t curry but had the same characteristics of curry with the bright golden color but a softer flavor. When I asked for the ingredient list I realized it was Turmeric. So when I came home I got on my computer to get all the facts on just “What is Tumeric?”

First of all Turmeric can be found in the spice section of the grocery store. It is a root, or rhizome, that looks like ginger on the outside with a bright orange flesh inside. The orange powder is ground from the rhizomes that are first boiled for hours and then dried for weeks. Dried turmeric has an earthy and slightly bitter taste.

Turmeric grows in the tropical forests of India, China, Southeast Asia, Jamaica, and Peru where it has been used for thousands of years. In Indian food, turmeric is an ingredient in curry, garam masala spice blends, and in chutneys. In Asian cooking, turmeric is used in soups, rice, salads, sauces, eggs, lentils, and fish recipes. Turmeric is also an ingredient in Worcestershire sauce, mustard and pickles.

Besides being a food, Turmeric is one of nature’s most powerful healers. The active ingredient in turmeric is curcumin which has potent anti-inflammatory properties and has been known in Chinese and Ayurvedic Medicines for thousands of years. Recent research has revealed that turmeric is a natural wonder, proving beneficial in the treatment of many different health conditions from cancer to Alzheimer’s disease

Here are 20 reasons to add turmeric to your diet:

1. It is a natural antiseptic and antibacterial agent, useful in disinfecting cuts and burns.

3. Prevented breast cancer from spreading to the lungs in mice.

4. May prevent melanoma and cause existing melanoma cells to commit suicide.

5. Reduces the risk of childhood leukemia.

6. Is a natural liver detoxifier.

7. May prevent and slow the progression of Alzheimer’s disease by removing amyloyd plaque buildup in the brain.

8. May prevent metastases from occurring in many different forms of cancer.

10. Has shown promise in slowing the progression of multiple sclerosis in mice.

11. Is a natural painkiller and cox-2 inhibitor.

12. May aid in fat metabolism and help in weight management.

13. Has long been used in Chinese medicine as a treatment for depression.

14. Because of its anti-inflammatory properties, it is a natural treatment for arthritis and rheumatoid arthritis.

15. Boosts the effects of chemo drug paclitaxel and reduces its side effects.

16. Promising studies are underway on the effects of turmeric on pancreatic cancer.

17. Studies are ongoing in the positive effects of turmeric on multiple myeloma.

18. Has been shown to stop the growth of new blood vessels in tumors.

19. Speeds up wound healing and assists in remodeling of damaged skin.

20. May help in the treatment of psoriasis and other inflammatory skin condition.

Afer rummaging through all the information on this incredible spice I decided I need to start adding it to my daily diet and find more recipes to include it in.

Turmeric comes in capsules, teas and liquid extracts, but Indian lore says it’s better to eat the ground turmeric than to take the extracted curcumin. Turmeric is considered safe when used as a spice in foods, but more research is needed to establish the safety of turmeric when used in herbal remedies.

It’s been said that if you take a round tablespoon of turmeric a day that should be enough to do the trick. But before going to the store there are a few precautions you should be aware of.

It should be used with caution by people with gallstones, stomach ulcers, or bile duct obstruction as turmeric may exacerbate these conditions.

Turmeric can be a uterine stimulant, so pregnant women should consult with a doctor before taking turmeric during pregnancy.

People with serious liver or heart conditions should also consult with a doctor before taking turmeric supplements.

However, unless taken in higher doses you shouldn’t have a problem but, it’s always a good idea to consult with your physician.

After eating the Cranberry Couscous numerous times I decided to try and get the recipe. Low and behold I did and I thought I’d share this tasty side dish with you. 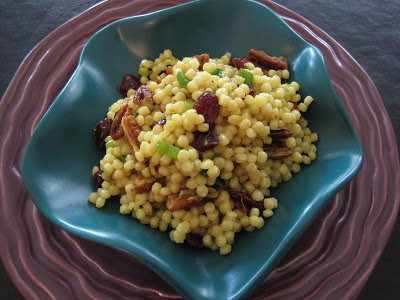 Bring a pot of salted water to a boil, and add the couscous. When it’s done (roughly 8-10 mins, or when it’s al dente), drain it but do not rinse. Set aside and let cool while you mince the scallions, toast and chop the pecans, and make the dressing.

In a small bowl, whisk together the canola oil, vinegar, honey, orange zest and juice, spices and salt and pepper.

In a large bowl, combine the couscous, cranberries, pecans and scallions. Pour the well-whisked dressing over it and toss to combine.

Serve immediately, or chill in the fridge for a few hours to blend the flavors.