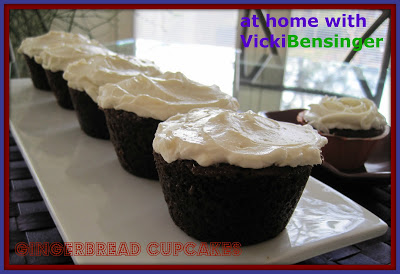 Life has been crazy lately and I haven’t had the opportunity to post as usual.  Hopefully this week I’ll be able to get more than one post in – at least that’s my goal.

For those of you that have been following me for a while you might remember when I posted my Pumpkin Gingerbread Trifle.  Well this year for Thanksgiving I decided to use portions of that recipe only this time I made cupcakes.

Since I wasn’t serving an army of people this year I felt cupcakes would hold out better if all weren’t eaten.  The trifle on the other hand doesn’t look so appealing to go back to for leftovers when only a portion is eaten, so cupcakes were the perfect solution.

I made the recipe as described here for the Gingerbread Cake except, I poured the batter into a large 6 cup muffin tin, unlined, but sprayed with non-stick spray.

Then I made the recipe for the Pumpkin Pudding only dividing the recipe in 1/2 as follows:

Combine pudding with the pumpkin pie filling. Fold in brown sugar and spices. Cover and chill.

After cupcakes have come out of the oven and cooled, poke a large hole in the center of each cupcake using the stick of a round wooden spoon or similar (only poke hole 3/4 of the way into the cupcake).

Place pudding into a pastry bag or zip lock baggy and snip bottom or corner and squeeze pudding into cupcake hole until fills to the top.  Level off, then spread with cream cheese frosting.  (See recipe) 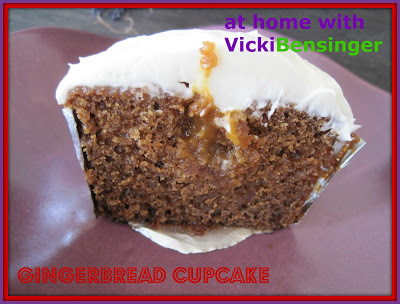 In another bowl whisk cream and 3/4 cup powdered sugar to firm peaks. Fold in cream cheese mixture. Chill 1 hour or until firm but spreadable. Spread or pipe onto cupcakes.  If desired top with crush gingersnaps, candied ginger, ginger sugar or simply leave with the luscious flavor of the cream cheese icing.