Of all the foods there are to eat, I have to admit, pizza is my all-time favorite. I could eat it everyday but I don’t think my body would be too happy about that anymore. Maybe when I was in my teens but not now.

So when I happened to be walking by the magazine rack at the grocery store yesterday and saw a magazine titled “PIZZA” I decided I had to pick it up. It’s by the famous husband and wife team Jane and Michael Stern who go across country eating Roadfood and talking about it.

The magazine has numerous recipes of varying types of pizza plus everything you ever wanted to know about pizza. It’s quite entertaining plus informative and the photos make me salivate.

A question that I found interesting and in my case true was, “Where is the best pizza in America?” Their study showed that it’s in the town where you grew up. Even sophisticated gastronomes who have eaten the most masterful pizzas from Naples to New Haven to the San Francisco Bay tend to maintain a soft spot in their hearts for the pizza pie they used to have with their friends, that they shared with their family and their sweetheart, and to which they return whenever they come home.

I know my favorite pizza is from Imo’s here in St Louis. I grew up with this delightful thin crusted pizza made with provel cheese and to this day it’s still my number 1 pizza of choice. When my sister comes home from California to visit, the first thing she does is order a bacon and hamburger pizza and a cheese pizza from Imo’s plus some toasted ravioli. My mom of course always asks for an anchovy on hers. Just one, right in the middle. I could never figure that one out but that’s how she likes hers.

Where is your favorite pizza from and what town is it in? Is it where you live now or where you grew up? That’s the key according to the Stern’s.

What are your favorite toppings? Mine are bacon and hamburger, and just plain cheese. I also like the veggie pizza, from California Pizza Kitchen. 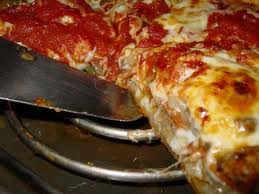 In addition the Stern’s talk about “Who Likes What Crust?” Thin, thick, chewy, crisp, or charred. Nobody is neutral on this issue. In the summer of 2010 though a poll was conducted of Roadfood.com members to determine their preference, and guess what? Thin crust pizza, my favorite, won!

What’s your favorite type of crust? I’d love to do our own poll so please send a post and let me know. I’d be curious to see which crust wins?

After reading the article I had to check out the Roadfood.com site.

It is non-franchised, sleeves-up food made by cooks, bakers, pitmasters, and sandwich-makers who are America’s culinary folk artists.

Roadfood is almost always informal and inexpensive; and the best Roadfood restaurants are colorful places enjoyed by locals (and savvy travelers) for their character as well as their menu.

They claim that it’s their intention that Roadfood.com will lead the way to:
great local color
the best regional specialties
unforgettable diners, celestial barbecue, and four-star pig-outs galore!

It’s a fun site to browse with recipes, forums, merchandise, maps, and more. So check it out and please cast your vote.

Which crust is your favorite?
Thin, Thick, Chewy, Crisp or Charred? If none of these then what kind?