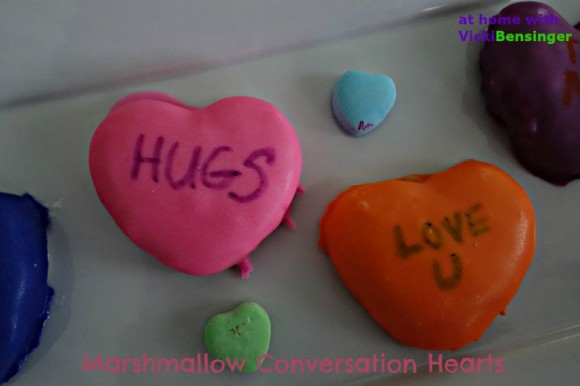 When I was a little girl Valentine’s Day was such fun, and it still is!  I can recall working diligently to create the best Valentine mailbox for my classmates to drop their cards in. Each year I tried to create a box more unique than the year before.  I think my favorite was an old time telephone, using a shoe box with Dixie Cup attached for the ear piece.  Of course the class would judge whose Valentine box was best, making it fun and stressful, especially since I thought long and hard to think outside the box when creating mine.

Along with my Valentine mailbox I’d have Valentine cards to give away, just like everyone else.  Back then they weren’t as fancy as many are today, but it didn’t matter.  What we had, was what we had, and didn’t know any different.  Oftentimes I’d give a box of Conversation Hearts with my Valentine, or just glue a conversation heart saying onto each card.

At the end of the day, I’d come home, go through those cards and wondered if some of those given to me had any hidden meaning.  Especially from the boys I had crushes on.  I’ll never know, but it certainly was fun and memorable. 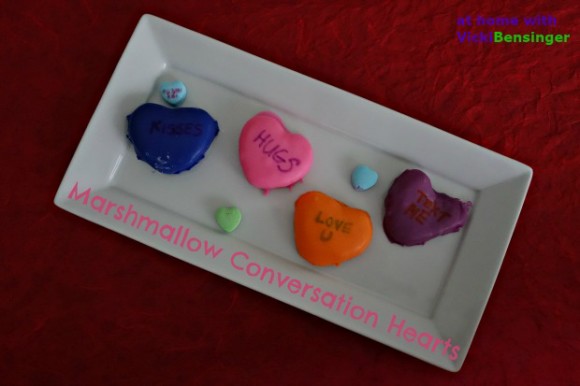 I’ve had this recipe an associate from a former job gave me from Merbs Candy, a local candy store in St. Louis.  The recipe was for their amazing Heavenly Hash, that I pulled out to make for my mom this Valentine’s Day.  She loves their Heavenly Hash, so I thought I’d surprise her with it.  Instead, while reviewing the recipe something came across my desk about Conversation Hearts.  I thought, “Wow, that could be fun, I wonder if it would work?” Marshmallow Conversation Hearts!  I went on Google and typed it in, and yes others had the same idea.

What I liked best about the Marshmallow recipe from Merb’s was it didn’t require you to use a candy thermometer.  So I decided to use the recipe I had, then headed over to Michael’s Crafts to get some Wilton Candy Melts to dip each heart shaped marshmallow into.  Creating the writing on each was the trick, that I was unclear how to achieve.  Low and behold Wilton makes a decorating pen for Candy Melts suitable for eating, and adhere to the candy melts.  I was set and ready to go!

Below is a quick video for you to see how I made these.  I have to say working with marshmallows is challenging  – it’s very sticky! One thing perplexed me – how was I to dip each marshmallow into warm candy melts without the marshmallow losing it’s shape?  I went online, looked through umpteen candy cookbooks I have, and found nothing about it. So I tried a few as the recipe called for dipping in chocolate for the Heavenly Hash, but they lost their shape and I had to eat the remnants!  Too many marshmallows do cause stomach aches!

I then decided to place my heart shaped marshmallows into the freezer until they were hard, which took about an hour.  I heated up my Wilton Candy Melts, and as each color was heated and melted I removed it from the microwave, added a few flakes of Paramount Crystals that would not only keep the melts from hardening too quickly, but thinning it as well.  Then I removed the frozen marshmallows that I wanted to dip from the freezer and dipped each one.  Yay!!!! It worked perfectly.  Once the Candy Melts had hardened onto my Marshmallow Hearts I added a little saying with the Wilton Decorating Pens for Candy Melts.  So there you have it.  Cute little Homemade Marshmallow Conversation Hearts – and they’re so tasty too! 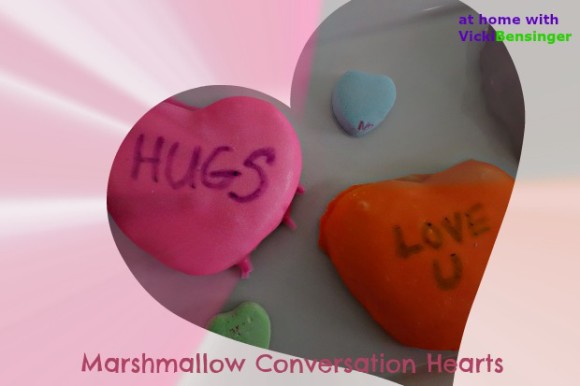 I had heart shaped biscuit cutters and used the smallest one.  However, use whatever size you have on hand.  Just remember you want to be able to write on them.

You will need 2 days to make these or make your marshmallows early in the day and finish 8 hours later.

I hope you’ll try these. They were fun, and challenging, but well worth the effort.

Below is my written recipe for you to enjoy! 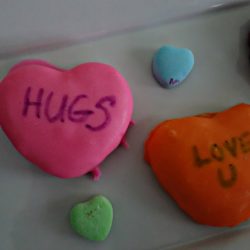 A fun and creative way to make conversation hearts for Valentine's Day!