Have you heard of the Peppadew? 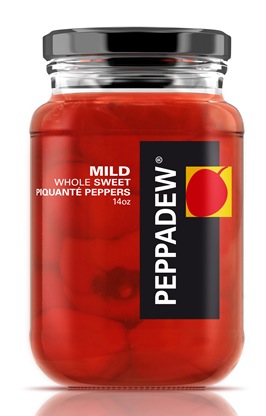 So I consider myself to be very familiar with new foods that come out but until yesterday I had not heard of the Peppadew.
I was having some friends over for dinner and decided to just pick up some mixed nuts at The Wine and Cheese Place a shop that I frequent for wines, cheese and food items that I can’t find anywhere else.
So I went to the back of the store to check out some of the cheese’s that they had and happened to look in the glass enclosed refrigerated case that had pate’s, olives and Peppadew’s. I asked the clerk what this beautiful bright red colored thing was stuffed with what appeared to be cheese. He told me it was a Peppadew stuffed with sheep and goats cheese in an herbed olive oil. He said it was amazingly delicious, so I asked if I could try a taste. He was a bit reluctant, which normally they welcome trying samples. However, they were low on them and rather pricey I found out so I understood. That said, he found a piece that had been cut in half so he gave me a taste. WOW! That’s all I can tell you. These are incredible. The flavor is out of this world.
So I purchased some for my friends to sample and also purchased a jar of them to try and stuff on my own. Which I’ll attempt this week. In the meantime, I decided to check out the Peppadew website to see just what these little babies are all about. This is what I learned:
The first truly new fruit to be launched on the world market since Kiwi Fruit 26 years ago, the story of the Peppadew™ Sweet & Spicy Fruit is as intriguing and endearing as its taste.

Just a few short years back, businessman and farmer J.S. (he prefers to stay anonymous) was looking around the garden of his holiday home in the Eastern Cape in South Africa when he spotted an unusual-looking bush, standing head high, laden with small bright red fruit which looked like something between miniature red peppers and cherry tomatoes.

Gingerly, he bit into one. It had a unique, delicious taste – a mixture of peppery and sweet, but with a distinctive flavor. Rightly believing that he had hit upon something really new, he saved seeds from the ripened fruit of the mother plant , cultivated the seedlings, developed the secret recipe with which to process the fruit and gave the processed fruit the name PEPPADEW™ (they are obviously peppery but are as sweet and tantalizing as the dew).

Check out their website and if you have a chance pick up this delicious fruit, either stuffed at The Wine and Cheese Place or in the jar. I’m sure other stores must have them or you can go to the Peppadew website and order them. Don’t forget to check out their recipes as well.

I’ll be interested to hear your comments if you pick some up or if you’ve tried them before. I think they are heavenly!