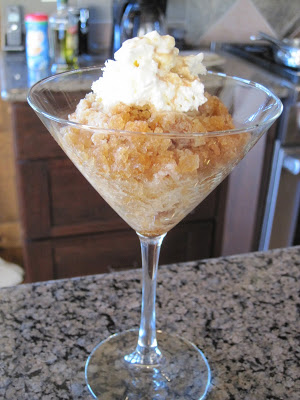 Yesterday morning I made a large pot of coffee only to find out I was the only one drinking it. So with the leftovers I decided I’d make a batch of Coffee Granita’s that I knew would be ready in time for dinner.

I took 2 cups of the coffee (any kind will work) and 3/4 cup of sugar. Blended them together until the sugar dissolved and then placed the mixture in the freezer. About 2 hours later I opened the freezer and with a fork I scraped the edges to loosen which were frozen. Then put the glass bowl that the mixture was in back to the freezer.

An hour later I did the same thing again and continued with this process until all the mixture was frozen and had been scraped into what looked like shavings or snowcone-like.

Then after dinner last night I took a martini glass and placed some of the frozen Coffee Granita into it. I then placed some homemade whipped cream on top and drizzled it with Bailey’s Irish Cream Liqueur.

All I can tell you was that it was so unbelieveably delicious! It was cold and refreshing plus with the whipped cream drizzled with the Bailey’s it put it over the top. It wasn’t too sweet but smooth and just right in my opinion.

” then just purchase some of the ready-made stuff. However, if you’ve never used an iSi you might consider purchasing one. It makes making whipped cream a cinch. Just add the whipping cream, CO2 cartrige, shake and you’ve got the real stuff. You can even doctor it up if you like with various syrups, etc. Use it as a topping for beverages, desserts, use it for sauces and even soups. It’s simple and quick! Here’s a video demo from the makers of iSi. I think you’ll find it entertaining!

At any rate, if you like coffee I know you’ll love this Granita. It was like having an after dinner drink and dessert all in one. YUM!!!