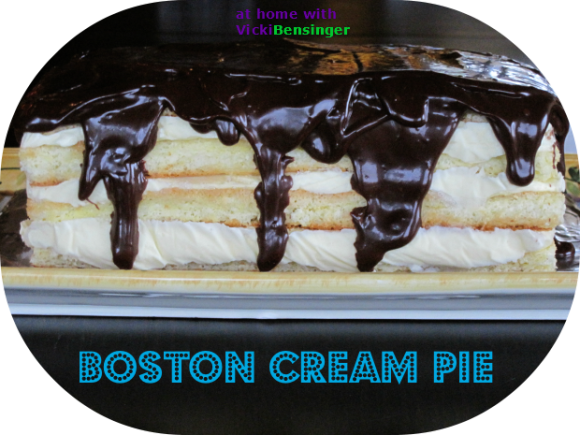 Both of my kids celebrate their birthdays in August.  I asked my son (27) what cake he wanted me to make and he chose my Mile High Carrot Cake.  My daughter (24) on the other hand fell in love with Boston Cream Pie while going to school in Boston and selected that.  You might recall my post about Mike’s Pastry Shop in Boston where we both did some serious indulging while I spent a long weekend there.

I’d never made Boston Cream Pie before, but since my little girl wanted it, I would make that for her, and the carrot cake for my son.

Boston Cream Pie isn’t really a pie. First served in 1856 in the Parker House hotel in Boston, now known as the Omni Parker House, it’s actually a vanilla sponge cake filled with pastry cream and topped with a chocolate glaze.

I remembered seeing a recipe for Boston Cream Pie in Joanne Chang’s “flour, too” cookbook .  Joanne has a cafe and bakery in Boston as well.  I reviewed the recipe at least 16 times, reading it over and over again.  It was so detailed I was afraid I’d leave something out.  Joanne’s version is a slightly lighter adaptation of the original Boston Cream Pie.

Joanne’s wording although detailed, did leave some room for interpretation which could make the difference from a wonderful cake, to a flop.  For instance, the sponge cake calls for 4 eggs, separated, plus 3 egg whites.  My take on this was to use 4 egg yolks with 7 egg whites.  However, when my daughter and I went to make the cake (she wanted to help), she insisted I was wrong.  I went online to see if I could find Joanne’s Boston Cream Pie recipe with comments, low and behold Joanne commented on this site that the recipe was as I had predicted.  Obviously others had their doubts.  I’m glad we checked.

There are 14 steps in this recipe, although within those steps it also calls to make a Pastry Cream, and Chocolate Ganache, requiring you to view other pages in the cookbook for those recipes.  This is quite detailed.

I decided to spread the recipe out over 3 days, especially since we are still vacationing in the mountains and had other plans on our agenda.  I’m glad I did, however, when I make this again, I will spread it out over 4 days before serving.  Why?

The sponge cake has coffee flavored syrup that is brushed over the top, then each layer is filled with the pastry/whipped cream combination.  At this point it’s placed in the freezer overnight.  Three hours before serving, the cake is removed from the freezer, and the chocolate ganache is poured over the top, then left out to thaw.

We left and went out for a birthday dinner.  Upon our arrival we lit the candles on both cakes, and had a slice of both the carrot cake and Boston Cream Pie.  The Boston Cream Pie had such a strong coffee flavor none of us could eat it.  I was so disgusted as you can imagine, since this cake took so long to prepare. BUT WAIT!

My first thought was to just pitch the cake realizing no one would eat it.  I decided to hold off, covered it in plastic wrap, and placed it in the refrigerator.  I thought, I’ll try it tomorrow just in case we disliked it merely because we were all so stuffed from dinner.

That next day after lunch I decided to try a small slice.  OMG!  I couldn’t believe it.  The Boston Cream Pie had no hint of coffee flavoring at all.  Now mind you we love coffee, except my husband, but it was as though it seeped into the cake overnight after having thawed and was delicious!  I had to be sure my taste buds weren’t playing a trick on me, so asked my family to try another slice.  They agreed, the coffee flavor was gone and they loved it.  What a relief!

I was so thrilled with the outcome, especially with the amount of effort that went into this cake.  So to add to Joanne Chang’s recipe:

After pouring the chocolate ganache over the frozen cake – leave cake out for 3 hours to thaw.  Then cover with plastic wrap and place in the refrigerator for another 24 hours.  Remove from the refrigerator and serve. 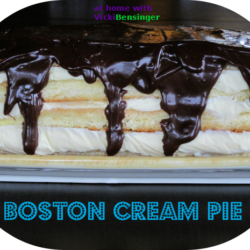 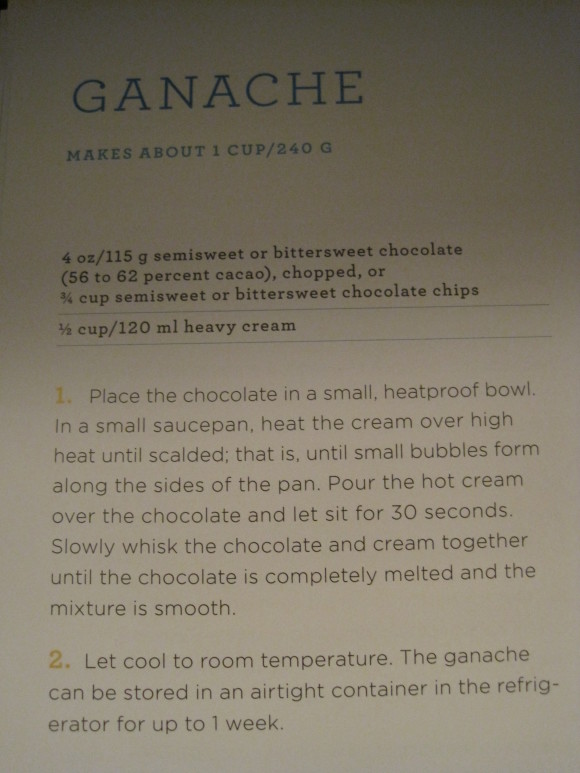 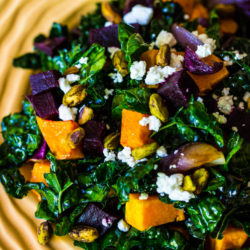