Bacon Sashimi – who would have thought! 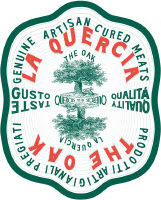 “Bacon Sashimi” – I just had sushi for dinner tonight but when I read this article i just had to share it.

With bacon-flavored lollipops, cupcakes and cotton candy all but standard fare, we rue that a delicious ingredient has become mere ornament.

Thankfully, La Quercia’s new Tamworth bacon is battling that trend by taking a minimalist approach to the popular meat. Salted, dried and smoked, it requires no time on the stove. That’s right: This is raw bacon.

The secret is in the genes. Tamworth, known in pork circles as the bacon pig, has a long belly with a higher meat-to-fat ratio than most. The fat is sweet and far lighter than the mouth-coating kind you find on Berkshires, that other beloved breed. La Quercia worked with Ozark Mountain Pork’s Russ Kremer (known as the “pope of pork”) for four years to nail the product.

Of course, you can cook it, and chefs have jumped at the opportunity. At Vie in Chicago, Tamworth bacon sits atop wood-grilled foie gras and maple pound cake. Hawaii’s Big Island steakhouse Monette’s wraps bananas with the bacon and also uses it as a base for its homemade steak sauce. And at Harrisburg, Pennsylvania’s Bricco, chef Jason Viscount serves Tamworth with seared scallops in leek vinaigrette.

The purest beauty of this bacon, though, is that you enjoy it without turning on the stove: Toast bread. Top with thinly sliced bacon. Pronounce it “bacon sashimi.” Eat.

Interested in purchasing some of La Quercia Tamworth Country Cured Bacon?  You can buy it here.

What will they think of next?  Although it does sound good!

Note: There was no name listed as the author of this article.