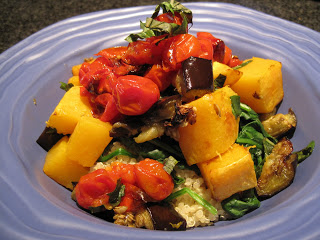 Tonight I was in the mood for some fresh fish and veggies but my husband just felt like a Roasted Chicken from the grocery store and a salad.  So I picked that up for him and roasted myself some fresh veggies with Quinoa

and decided to forget the fish.
I just didn’t feel like anything heavy but something light and healthy.   When I was at the store I looked to see which vegetables looked their best.  I decided on eggplant, butternut squash, baby tomatoes and spinach and then for the protein I thought I’d make a batch of quinoa which contains 6 grams of protein.
There really isn’t much of a recipe.  It’s just simply boiling 2 cups of water and adding 1 cup of well rinsed quinoa to the boiling water.  After it returned to a boil, I turned the heat down to a simmer and I covered the pot for about 15 minutes.  I then turned off the heat and let it set for another 15 minutes to absorb the rest of the liquid and give the quinoa time to fluff up.
In the meantime, while the quinoa was cooking I washed the tomatoes, butternut squash and eggplant.  I cut the squash and eggplant into cubes and placed all 3 vegetables together, mixed with some olive oil on a foil lined cooking sheet.  I then placed the vegetables into a 450F degree oven for about 20 minutes or until all were tender, then drizzled the veggies with a chiffonade of basil.  I cooked my vegetables on convention/bake, so if you are just baking it would probably take closer to 30 minutes. 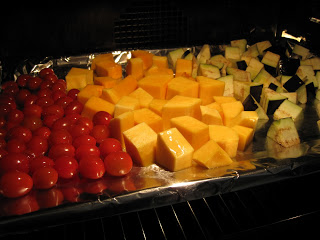 When the veggies were just about done I rinsed a 10 oz. package of spinach and put it into a pot (with just the droplets of water clinging to the spinach leaves), to cook for all of 4 minutes.  Just enough to wilt them and keep their bright green color.
At this point I placed a fistful of quinoa into a bowl and topped it with the roasted veggies and spinach.
After eating this dish I was totally satisfied and full.  The protein in the quinoa really helps to fill you up while providing so many nutrititional benefits.
A simple yet satisfying meal.  If you’re looking for something light, nourishing and delcious try making this dish. Of course feel free to substitute with the vegetables of choice.
Enjoy!
Recipes, Vegetarian