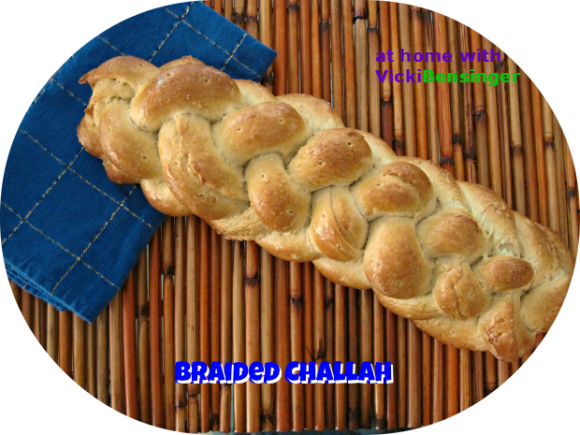 I don’t make bread that often, but when I do, I love the aroma that permeates through my house as they bake in the oven.  I bake quick breads often and popovers, but loaves that require hours and hours on end of proofing (time to rise) I typically don’t have time for.  A favorite of mine is Challah or Brioche – an egg bread which requires 4+ hours to rise.

It’s been years since I made Challah.  In fact, last time was probably back in the 60s with my grandmother – I was quite young.  I decided to make it again this weekend since I had time.  I found a recipe online from Fine Cooking that claimed to be similar to that from Whole Foods – whose Challah I think is heavenly!

I braided my Challah with six braids – what  fun, until my husband came into the kitchen and distracted me!.  I lost my place and twice had to start over. That said, it’s really not difficult, you just need to focus.  While focusing so much I forgot to add raisins to the dough.  I prefer that for added sweetness.

Overall, my loaf was delicious and beautiful, and it makes incredible french toast.  However, next time I’ll make it by combining the honey, water, and yeast together until they react, then add the flour.  This recipe has you adding some flour to the yeast mix to start, which is fine.  However, I prefer making my breads the other way – personal preference. I hope you’ll give this a try.

Fine Cooking shared a step-by-step video for braiding challah that I found useful especially since I haven’t made this in years.  I think you’ll find it helpful too.

Here’s the recipe, and once you’ve followed the directions, view the video to make your own 6 braided loaf……. 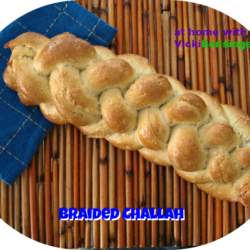 1. In a large bowl, mix the yeast with 1/2 cup of the flour. Add the warm water, stir, and let this mixture, called a sponge, sit until it starts to puff up, 15-to 20-minutes. Add the eggs, oil, honey, and salt; stir until well combined. The sponge will remain lumpy—this is fine. Add the remaining flour and mix the dough in the bowl until all the ingredients are combined. Turn the dough out onto a work surface and knead until fairly smooth, about 2 minutes. The dough should feel very firm and will be hard to knead. If it’s soft and sticky, add more flour until it’s very firm. Transfer the dough to a large, clean container and cover it well. Let it rise until doubled in bulk and very soft to the touch, about 2 hours, depending on the room temperature. Line an insulated baking sheet with parchment or oiled foil. If you don’t have an insulated sheet, stack two sheets together (this keeps the bottom of the bread from over browning during baking).

2. To shape the dough: Turn the dough out onto a lightly floured work surface and sprinkle a little more flour over it. Spread and flatten the dough a bit, but don’t worry about punching it down. Cut it into six equal pieces. Set aside the dough pieces, cover them lightly with plastic, and brush all the flour
off the work surface. Have a small bowl of water handy. Using no flour, roll a piece of dough with a rolling pin into a very thin sheet, between 1/8 and 1/4 inch thick (don’t worry about making a rectangle; an amoeba-type shape is fine). The dough may stick to the work surface; this is alright—just nudge it gently with a dough scraper. Tightly roll up the sheet like a carpet to form a strand. Roll the strand back and forth between your hands until it’s thin, very even, and 12 to 15 inches long. At the ends of the strand, angle the outer edge of your hands into the work surface as you’re rolling to make the ends pointy and the strand thicker in the middle (This will help you get a football-shaped loaf). The strand needs to grip the work surface slightly during this rolling; the “grab” will help as you roll. If the strand is too slick, very lightly dampen it with water to help it grip the work surface better. Repeat the rolling out, rolling up, and elongating steps with the remaining five pieces of dough, rolling them out to the same length. Lightly sprinkle all the strands with flour to prevent them from sticking to one another during proofing. Arrange the strands parallel to one another. At one end, gather and pinch the strands very tightly together. Weight the end with a heavy canister to keep the braid from moving and to leave your hands free, and braid closely, following the illustrations below. Lightly tap each end of the loaf with your palms to tuck it under the loaf.

3. Transfer the braid to the lined baking sheet and cover it loosely but thoroughly with plastic wrap. Let proof until doubled in bulk and the loaf remains indented when lightly pressed, about 2 hours, depending on room temperature. (If in doubt, let the dough proof more rather than less.)

4. To bake: Position an oven rack in the lower third of the oven and heat the oven to 325°F. Just before baking, brush the dough with the beaten egg. Sprinkle with sesame seeds or poppy seeds, if using. With a thin wooden skewer, poke the bread deeply all over (the holes will prevent air pockets and help the bread keep its shape during baking). Bake for 20 minutes. Rotate the challah 180 degrees and bake until the bread is a dark, burnished brown, about another 15 minutes. (If the challah is browning too rapidly cover it loosely with foil and let it finish baking. Don’t remove the loaf too soon, as you’ll risk under baking.) Let cool thoroughly on a rack.