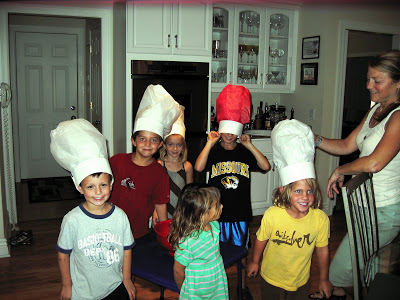 I’ve had quite a few classes that I’ve been doing lately, most of them adult classes and a few children’s. So when a family friend called to tell me that her grandkids were coming in town and would I mind doing a cooking class for them and their friends in her home, I said absolutely. Of course, then she told me there would be 6 children, four of them were 4 years old and two were 6 years old.

Typically I don’t do classes for children under the age of 7 mainly because of their motors skills and attention span. However, I decided it would be fun and somewhat challenging.

So we decided I would teach them how to make homemade pizza and frozen smores. The kids had such a great time and they were so intent in mixing and kneading the dough. Then of course they made various shapes with their piece of dough before covering it with sauce and cheese. The smores were just as big a hit and all the children including the parents had a great time.

I couldn’t begin to tell you how adorable they each were so I posted the photo above with them wearing chefs hats that I made for each of them. The one with the red chefs hat was the head chef. I’m sure you’ll agree they are precious!

It was a fun afternoon that I just had to share.