There’s nothing like some crispy bacon, pancakes with hot maple syrup and a piping hot cup of coffee for breakfast in the morning. Unfortunately I haven’t had that in years just because if I start I’ll never stop and the calories will just stick to my body. 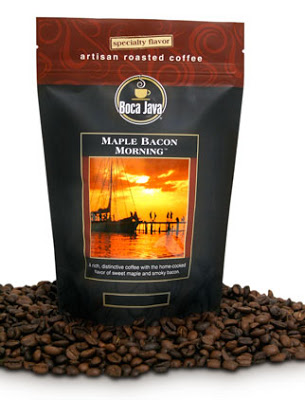 But what if you could have all that for virtually no calories at all? Sounds great doesn’t it? Well now you can with Boca Java Maple Bacon Morning, a curiously efficient concoction that brings together syrup and bacon in roasted coffee form. Yes you heard that right – it’s COFFEE!

Here’s what the makers of this heavenly sounding coffee have to say about it:

Think of it as your three favorite food groups all in one place. (Feel free to add your fourth, whiskey, on your own time.) Just be prepared: from the moment you open the bag, your world will begin smelling of java, savory smoke and syrup, and it’s going to be intoxicating. You might want to warn your neighbors.

In fact, once this stuff is brewing, that unmistakable potpourri of sweet, smoky coffee will only get more intense. Then, when you finally sip, you’ll first detect a sugary (but not sticky) taste of syrup. After that, you’ll get hit with a full-bodied, smoky flavor—that’s the unmistakable taste of bacon, made all the more miraculous by the curious fact that no actual bacon’s involved.

I don’t know about the rest of you, but it would be nice to finally indulge in such a luscious meal without having to worry about the calories.

So where can you find Boca Java Maple Bacon Morning? Right here.