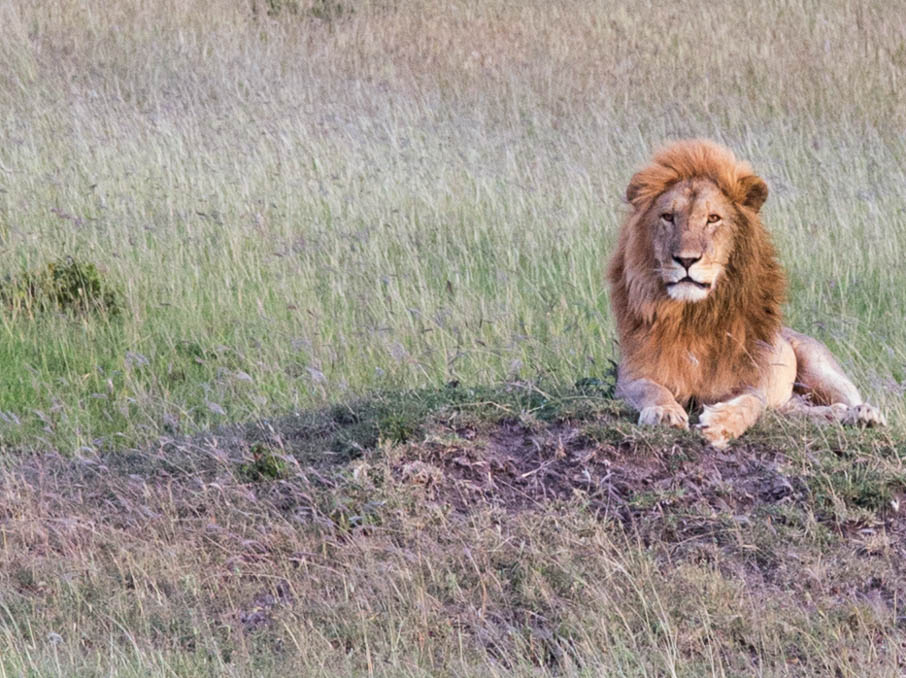 An African Safari has been on my bucket list ever since my husband and son went some 10+ years ago.  So when my daughter called saying she had vacation time coming, asking if anyone wanted to go, I said I’d love to! With little time to spare my son chimed in and said, “why not go to Africa?”  That was all we needed to hear, and decided to make it happen. 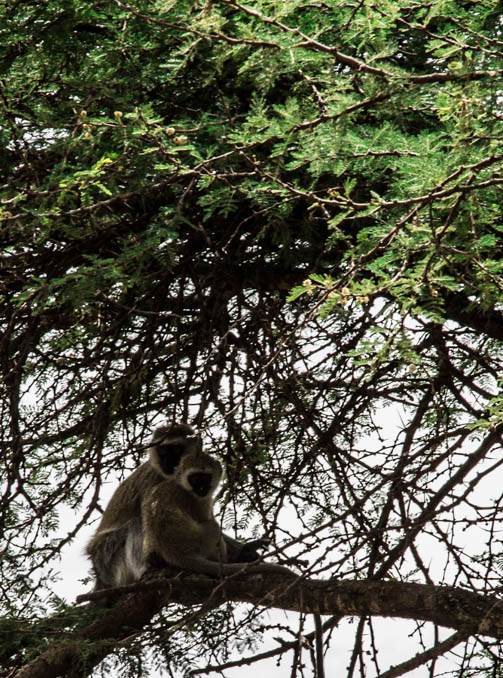 With virtually one month to plan ourtrip we contacted andBeyond travel company based in Africa.   Joss Kent, son from Abecrombie & Kent is CEO of the company.

Since we planned this at the last minute I asked Melanie Dannhaueser from andBeyond if she could assist us, informing her of our time frame.  With just 14 days available to travel, Melanie put together a package for us which we tweaked slightly. 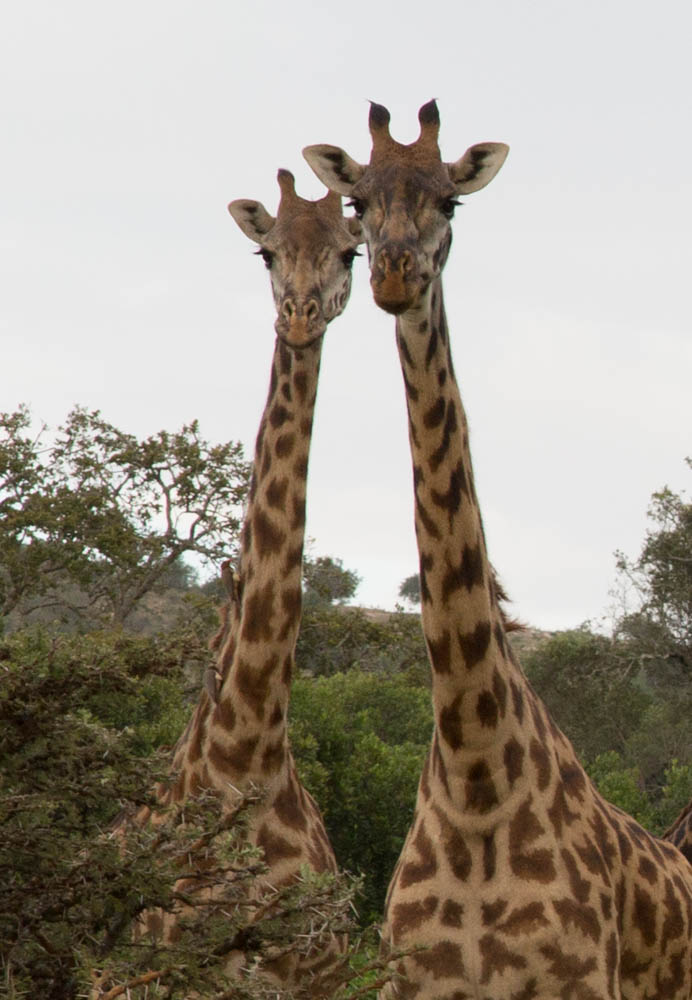 In my opinion 4 weeks would have been the perfect length of time.  Traveling between each location by commuter plane was exhausting. Spending more time in some areas would have been more ideal. We didn’t have that luxury, but Melanie helped us make good use of our time. 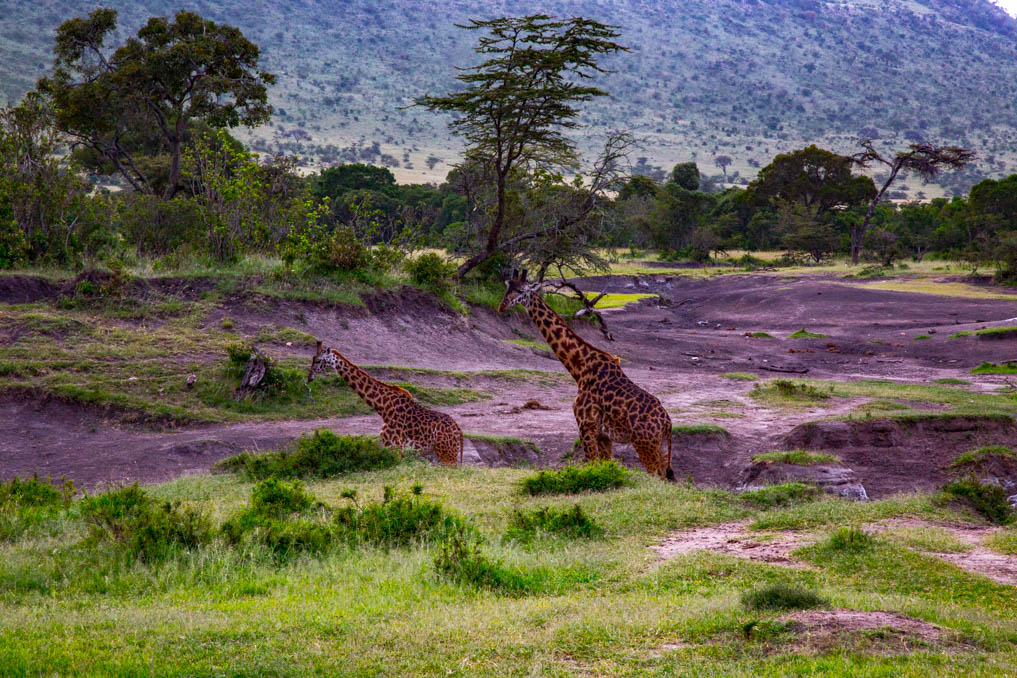 That said, our trip was amazing!  We experienced so many wild animals on our African Safari, and at the peak of mating season – an education in itself. From off road safari’s, gorilla trekking and even a visit to a Maasai village.  We ended our trip in Cape Town South Africa. That gave us us time to recover from our adventures, in addition to exploring the city and surrounding areas. 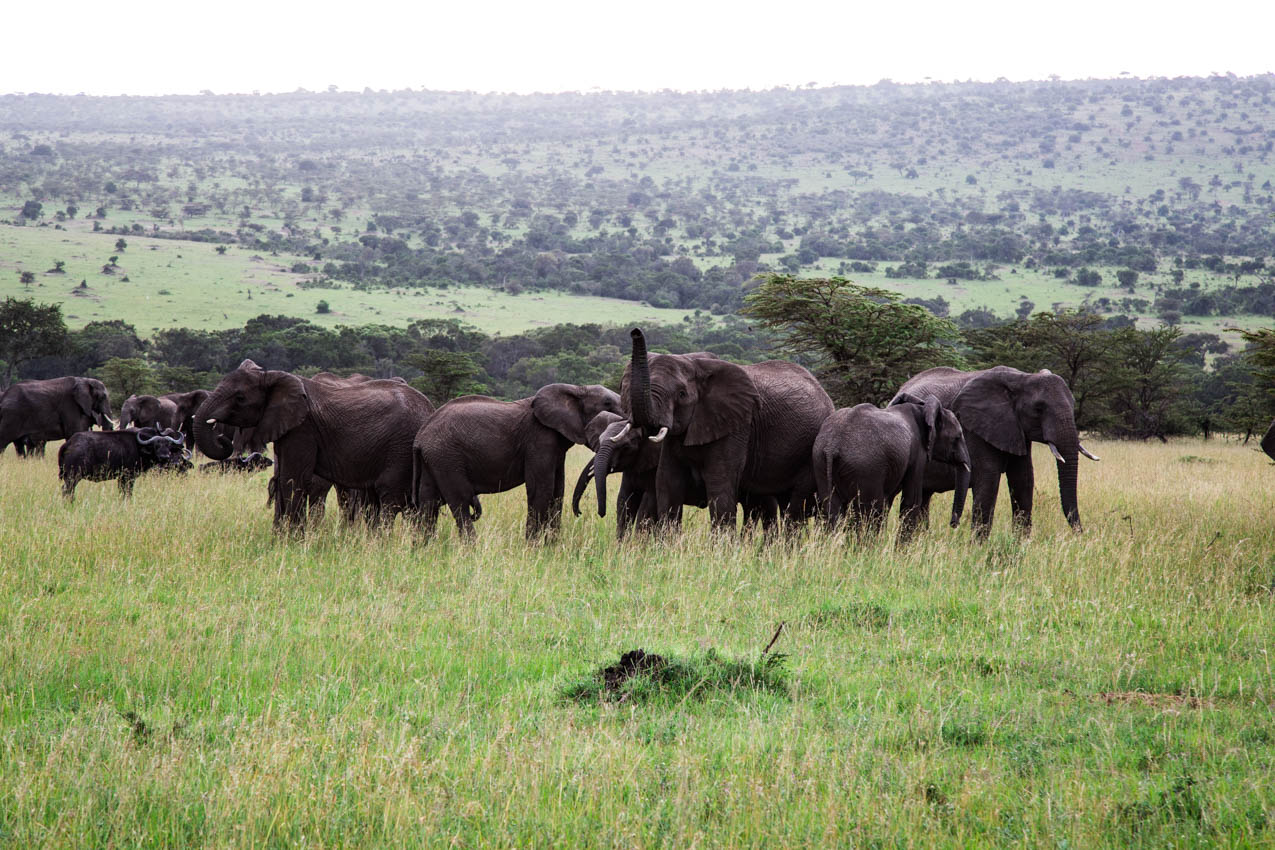 Our first stop was to Northern Serengeti, Tanzania.  We flew into Arusha for a nights stay at the Arusha Coffee Lodge, literally to spend the night.  Then up bright and early for a commuter flight to the Serengeti to stay at Kleins Camp an andBeyond lodge. 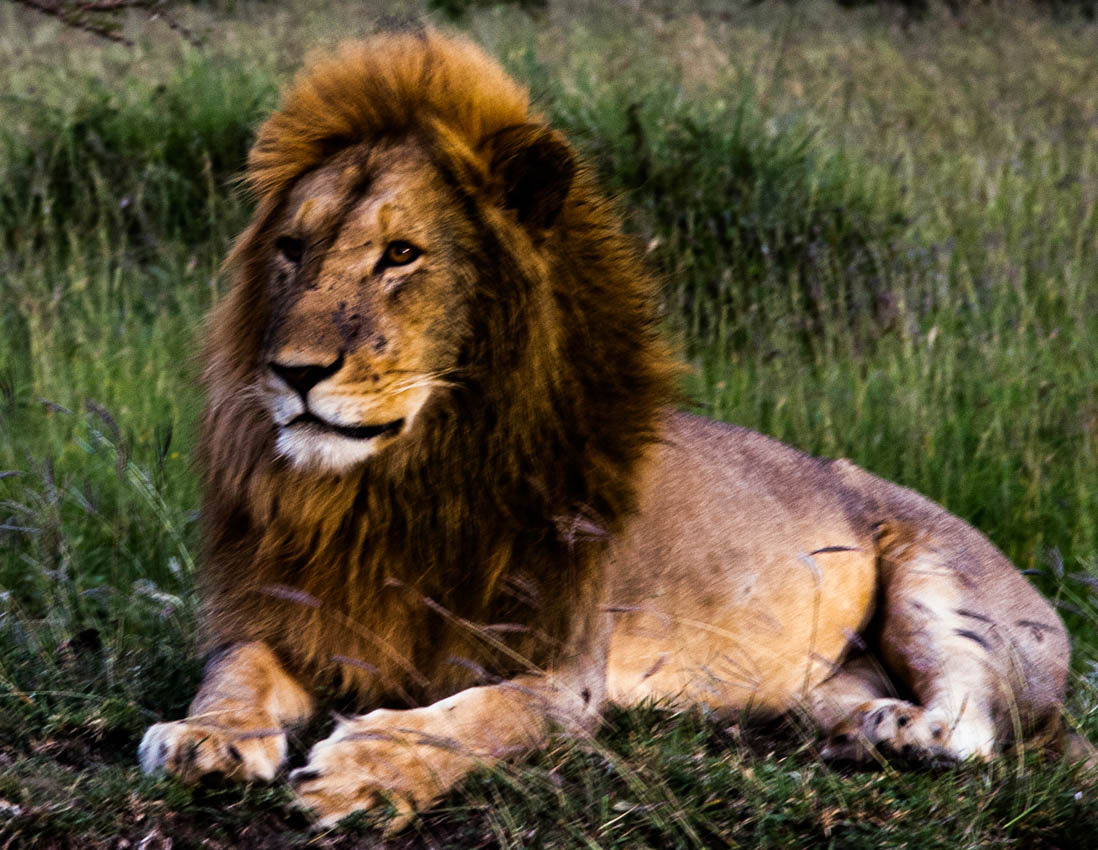 The drive from the small dirt landing strip where we were picked up, was an African safari ride to Klein’s Camp.  Seeing a range of wildlife along the way got us revved up about our visit. 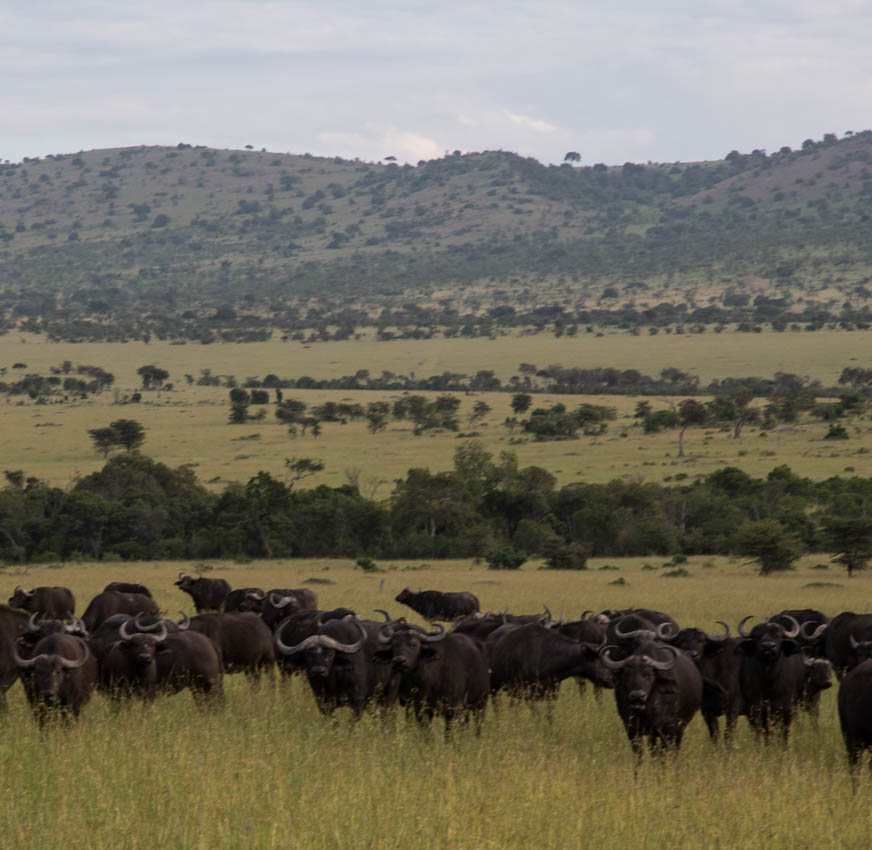 Upon arrival we were greeted by the staff singing and clapping as we approached the camp.  It was a fun way to start our trip. After being given a tour of the property we were assigned our private guides during our stay. 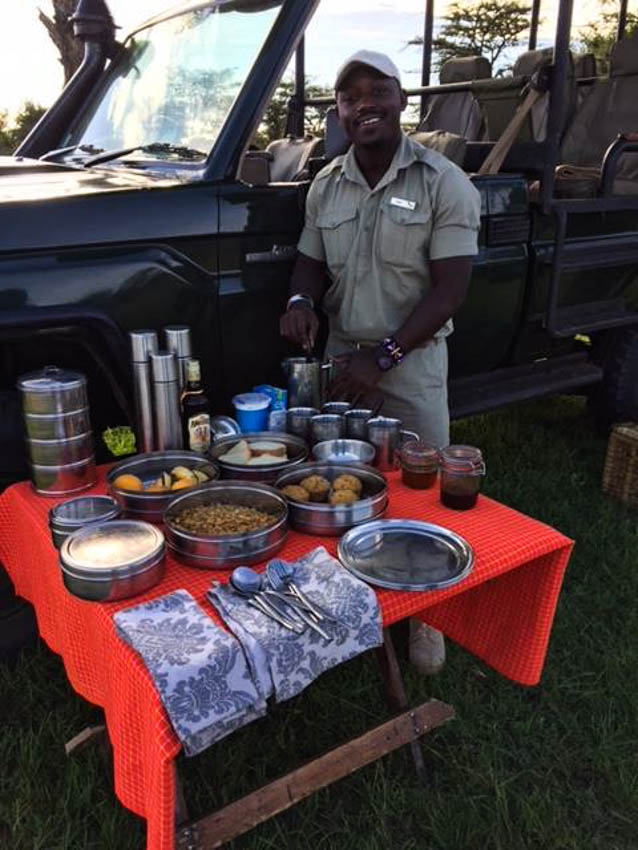 (Alpha, our guide, fixing us breakfast in the bush one morning during safari) 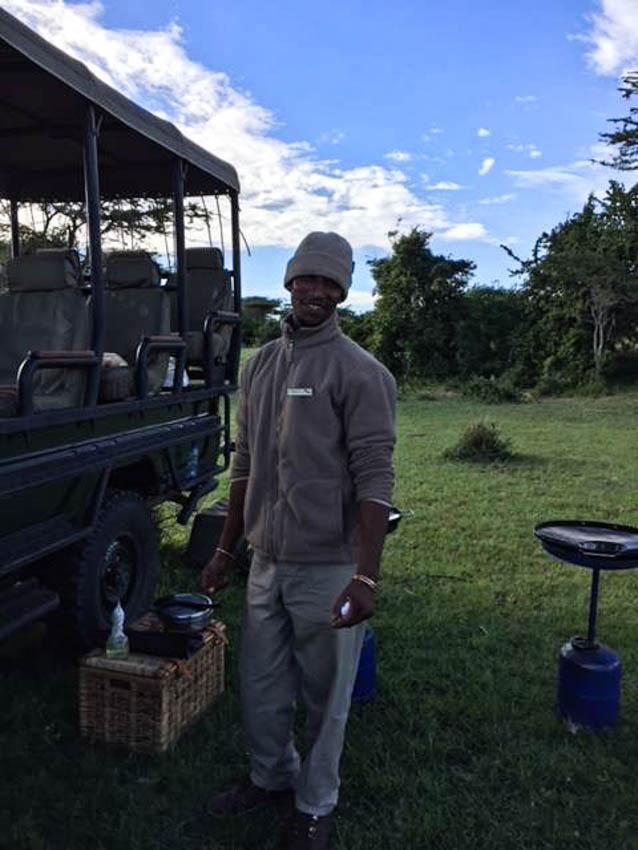 In addition we had a private butler, Mike, to help us with anything we needed, plus dining.  Rooms were spacious and lovely, serviced daily, and we were left with a good supply of bottled water. All meals and drinks were included, and over the top delicious! 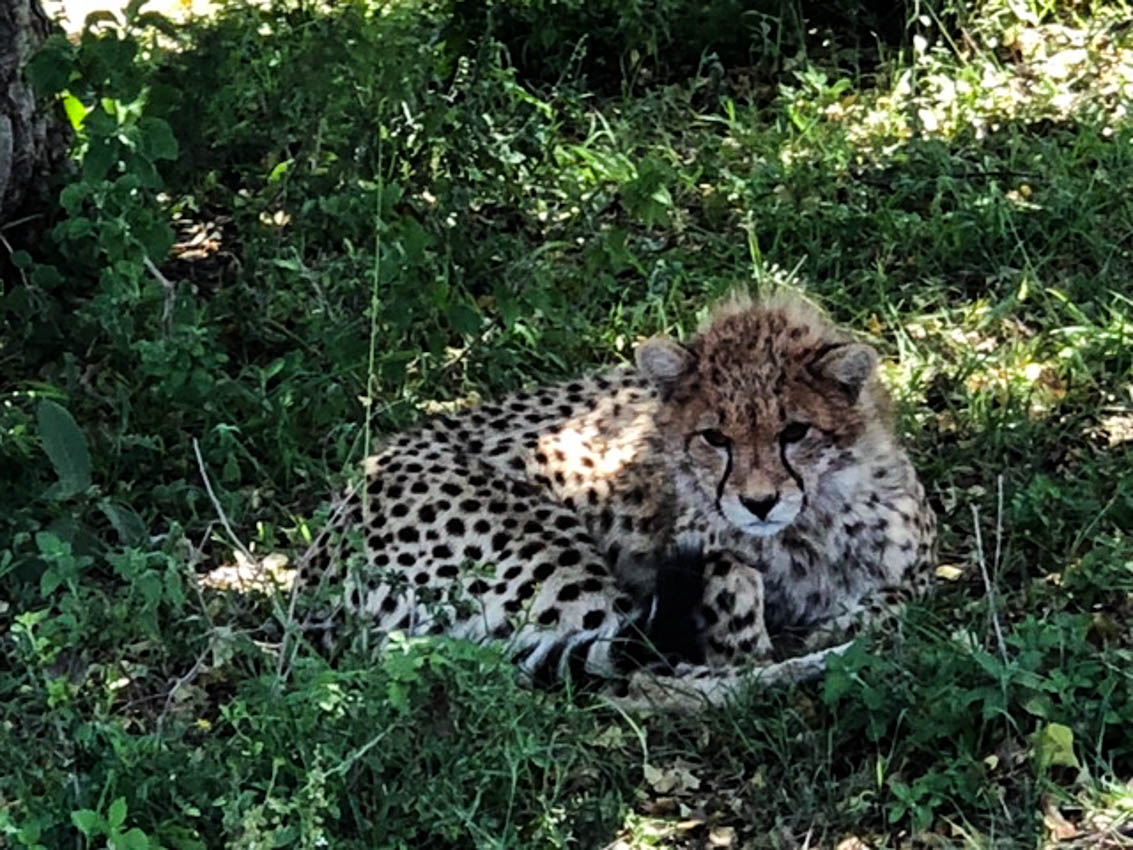 We spent 2 full days on an off road safari with our private guides. Starting at 6:30 am with a break for lunch then back out for night drives until around 8pm, home for dinner and bed. 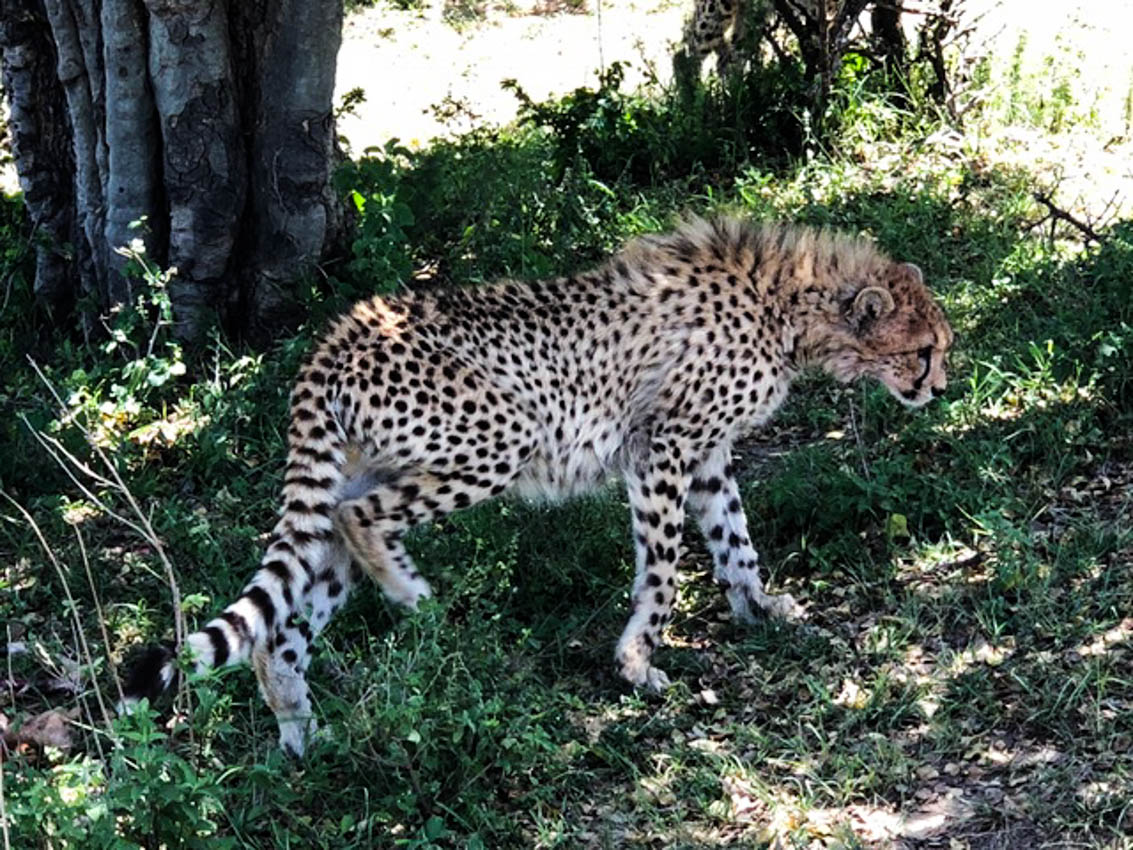 On the second day we spent the morning on an off road safari.  We were scouting out cheetahs, leopards and lions. Then mid afternoon we visited the Maasai Village. 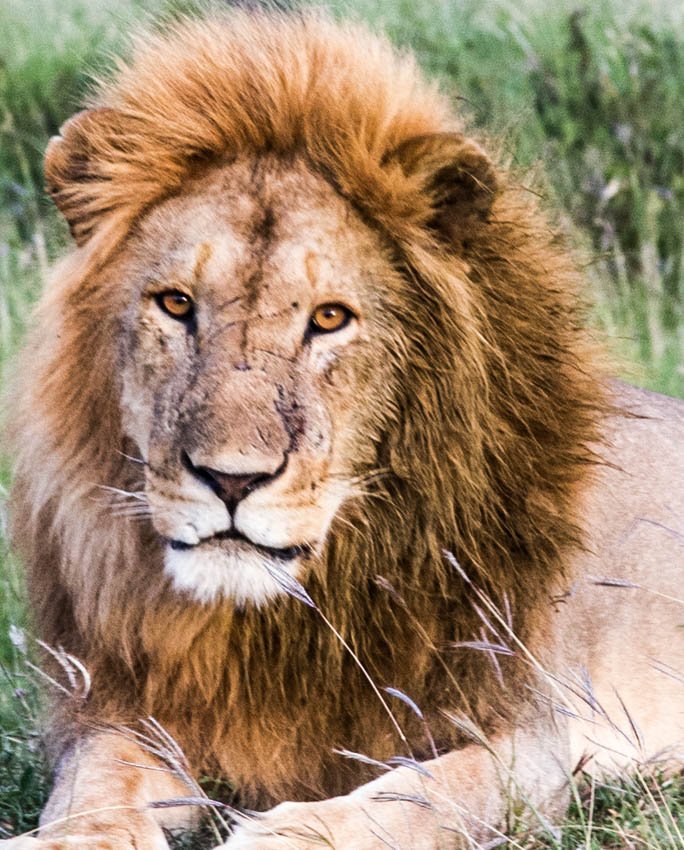 I was especially excited to visit the Maasai Village to see how the families live, plus tour the schools.  My excitement quickly diminished! 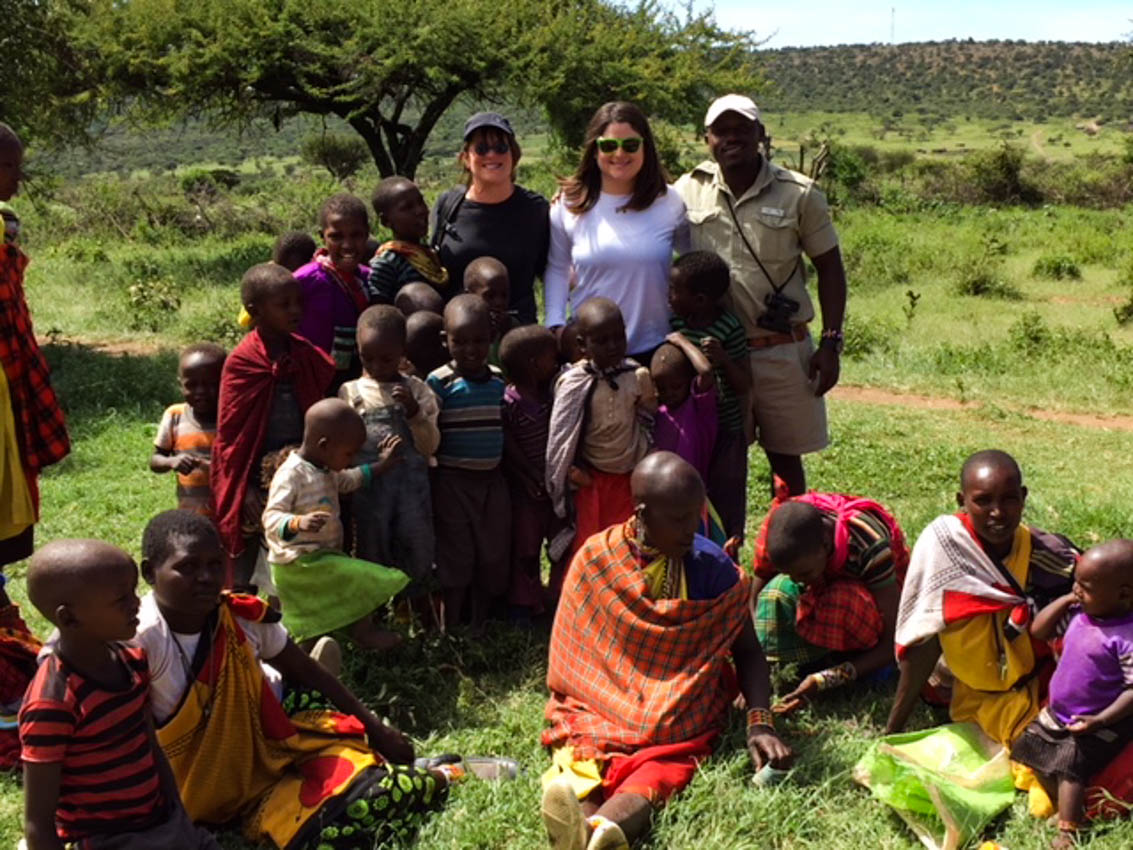 Upon our arrival we were greeted by the children and women of the village.  I took photos of them with my phone and shared them with the children.  They were so excited to see themselves, especially since they have no mirrors.  The eldest girl in the group scrolled through the photos on my phone, while the younger children watched and laughed.  It was heartwarming. 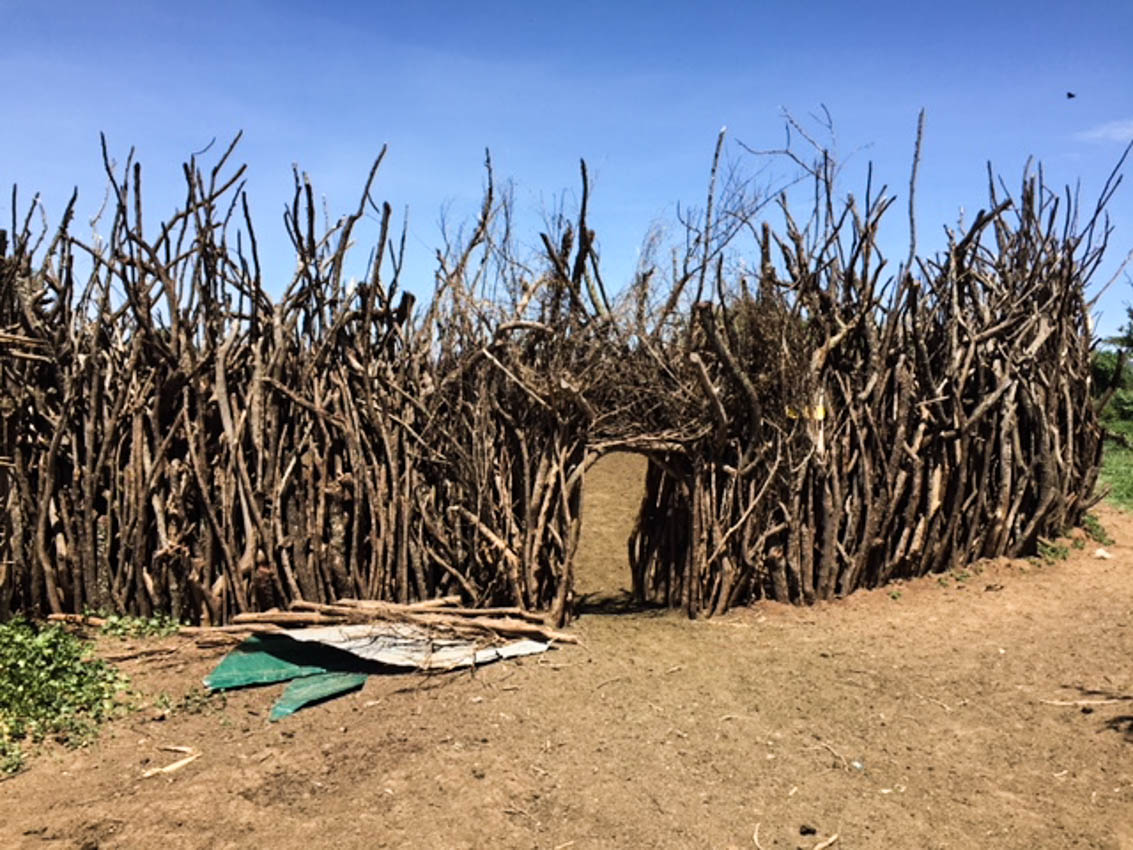 Our guides Alpha & Gwandu took us on a tour to visit various parts of the village.  They showed us the Boma –  made of Acacia tree branches. Built to protect the cattle & goats at night from the wild animals.  It was so fascinating to see the structure and how sturdy it was.

They talked to us about Maasai housing, and gave us the 411 on the Maasai way of life.  I had never read about it and was somewhat disturbed to hear the specifics regarding the women, men, and their families.

Prior to going into the home of Losikari, Gwandu (one of our guides) informed us that in the Maasai village, the men select a woman to marry.  The men, some of them as old as 55-60 may select a bride as young as 12-14 years old.  The women have no say in their spouse and must marry them. They have to remain married to them for the rest of their lives.  If the man dies she cannot marry anyone else, but instead becomes part of her husbands family.

The men can marry as many women as they like, and have sex with whomever they want.  This however is forbidden for women, and if infidelity is discovered, the women can be killed.

The men are responsible for building a fence (out of branches) around their community to keep wild animals out. A separate fence is also built for the cows & goats (Boma).  Their free time is spent drinking and getting drunk with their friends, and having sex with other women. 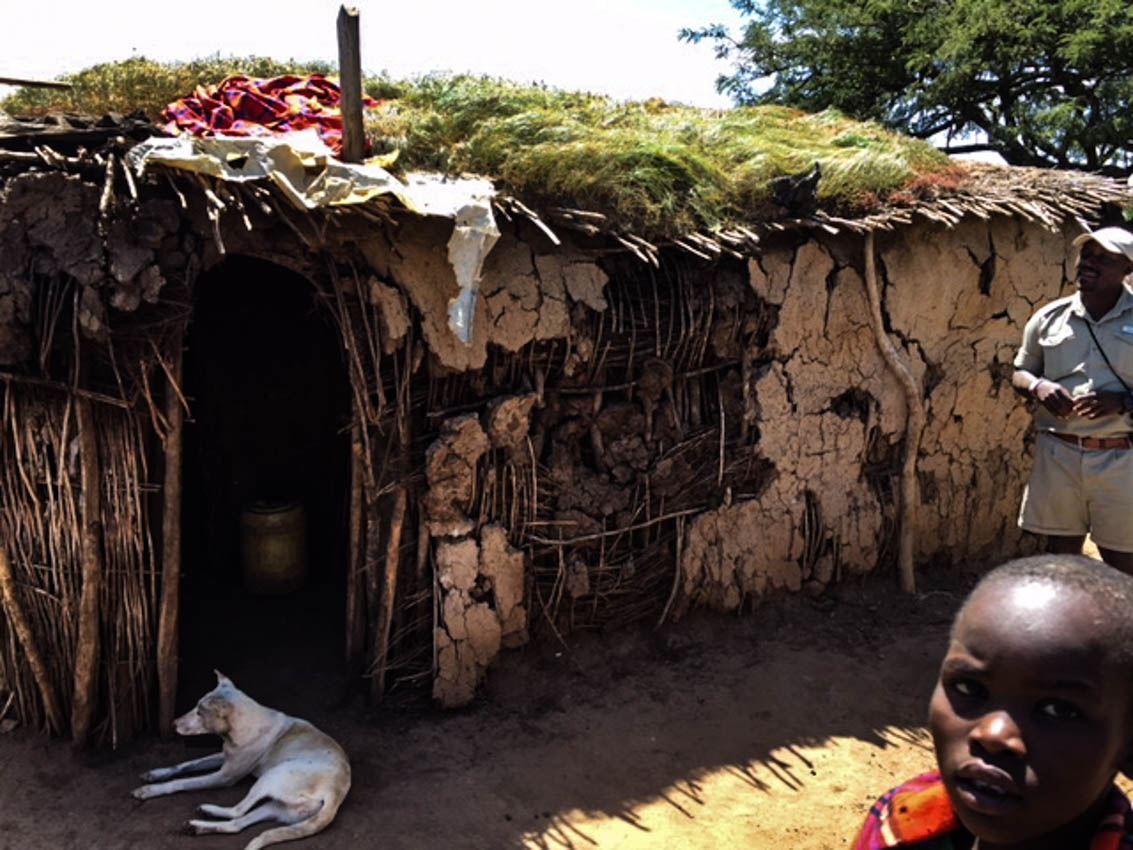 The women are responsible for taking care of their children and feeding their family.  Some women have as many as 17, but 8 children is more common today.  The women are also responsible for building their homes, call Inkajijik, which can take up to 3-4 months to construct.  They are made of cow hide, cow dung, cow urine, grass, branches and clay, from the earth.  Each home has several very tiny windows.  No running water, and sometimes a battery operated light in the kitchen area. 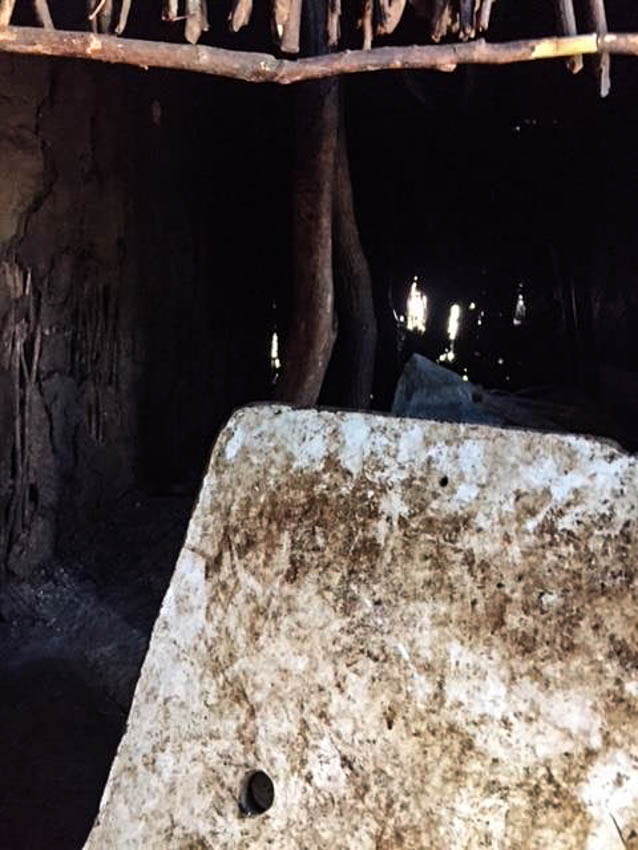 In the home I visited there was a small room for the goats upon entering. The goats are very valuable to the family.  They use them as a source for money, and food. As for the cows they make a small puncture in their neck to capture their blood in a gourd, and blend with milk for medicinal purposes.  Then seal the neck up with cow dong and off they go.  Apparently the cow dong does the trick. 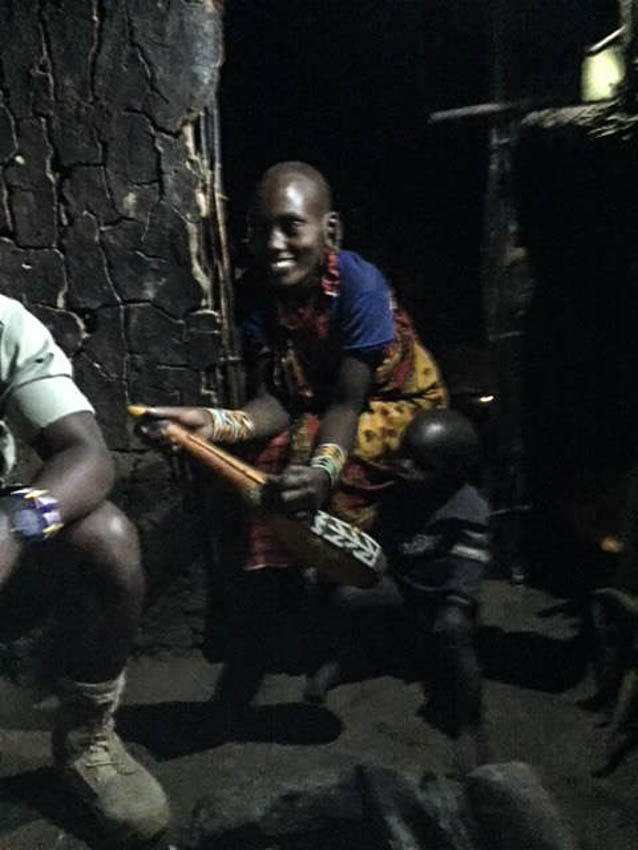 The women also make beautiful beaded jewelry that they sell to support their family.  All this, plus taking care of their children while the husbands basically do what they want – or so we were told by some African woman on our flight over.

Women are treated with little respect, but basically like slaves – as I interpreted.  The Maasai men order the women around with little for them to say about anything!

Although FGM (female genital mutilation) is now becoming an option, as of a couple years ago it was not. You can read more about FGM here, and watch the video below for more details.

As our guides walked us into the home of Losikari we sat down and chatted inside.  She did not speak english.  We sat in the kitchen area which consisted of a small pit in the floor with wood to build a fire.  The floors were dirt, yet very clean and tidy, with a small round window just enough for light to come in. There was also a window in the bedroom for her husband, and one in Losikari’s room where she slept with her children. 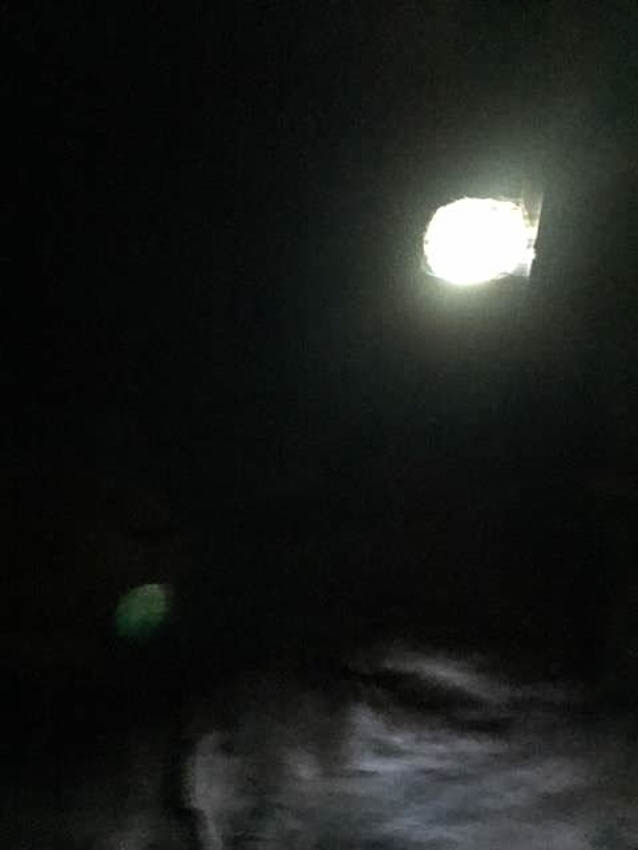 (Since there was little light the photos came out a bit blury.  The small circle is the window).

The husbands sleep alone, while the wives sleep in the tiny round room with their children.  When the man chooses to be intimate with one of his wives, the children are sent to another of his wives homes so they can have privacy. 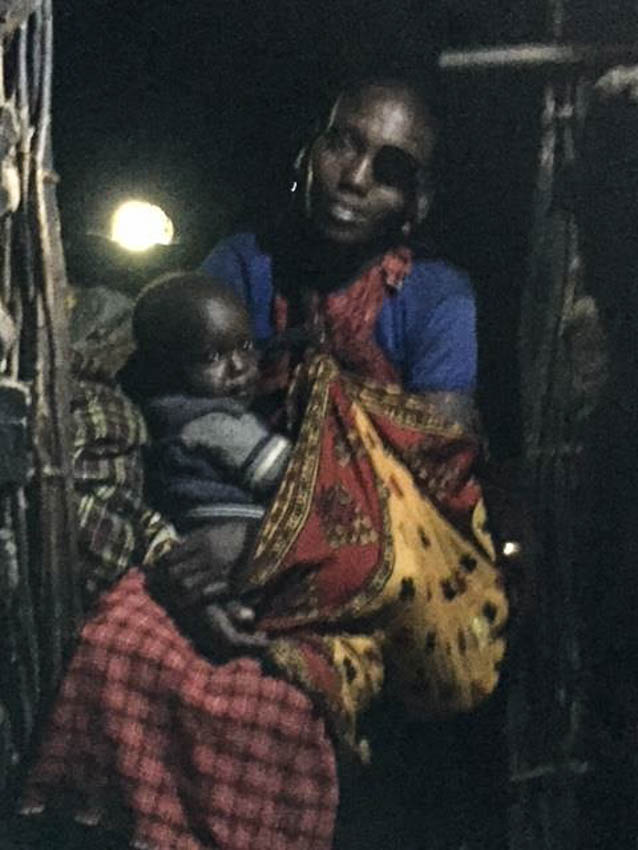 It all sounds revolting to me and no different than the men who feel empowered in the entertainment industry and life.  For men to feel empowered to take advantage of women because of their status is so unsettling.  These women become trapped when married, and impregnated at such an early age, that they’re then unable to finish their education. They can’t read or count and because of that, haven’t a clue how old they are, or their children.  It’s so sad! 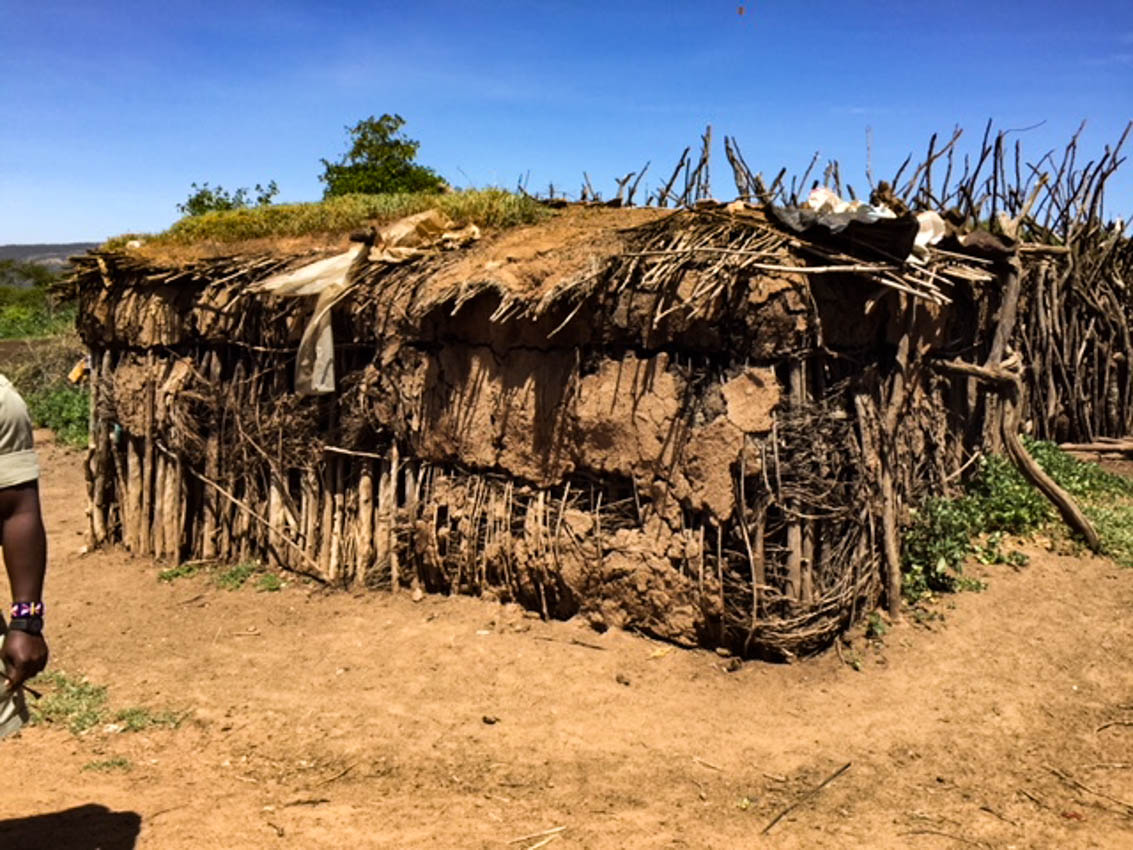 After leaving Losikari’s home we walked outside. The women of the Maasai village had set up a market on the ground for us to view their beaded craft.  I wished I had brought a ton of cash to purchase everything I could, but had just enough to purchase about 8 items.  I left feeling guilty that I didn’t purchase more. I would have preferred helping the women to abandon their way of life.

Many of the Maasai women though I’m sure are content, as they don’t know the difference.  To view them in the community with their children and friends they look very happy! I however, when looking closely at them, could only see the exhaustion on the women’s faces in the village.  It saddened me. 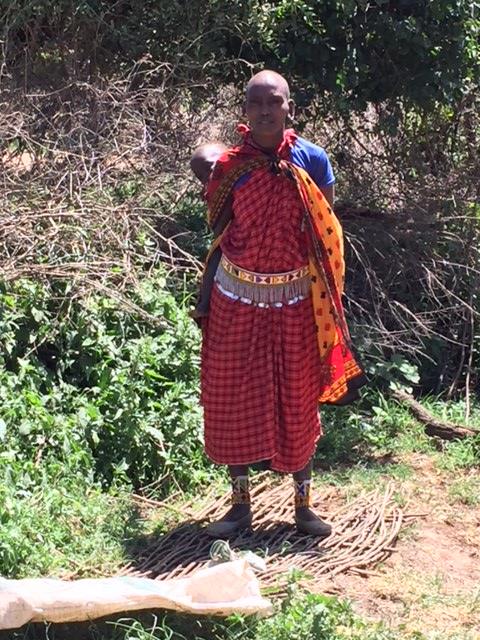 The women were all beautiful, had lovely smiles and wore bright colored drapes of cloth. Each covered with beaded jewels, they had made.  Each color they wore represented something:

After a full day we returned back to Klein’s Camp where I sat down and cried.  I was overwhelmed by what I saw and learned, and truly had trouble getting past it.

To believe these types of tribes still exist is something you have to witness with your own eyes.  Quite remarkable! It was educational, heartwarming, and disturbing!

For for information on the Maasai people and ways to help them, visit the Maasai Association.

Our days were long, but exciting!

The rooms at Klein’s Camp were glorious and spacious, with cabins each set apart individually on the grounds overlooking the Serengeti.  As night time came we were not allowed to roam the premises without a guide to light the way, and guard us from any wild animals that may come onto the grounds.  Each guard would walk with a spear in the event danger approached us. 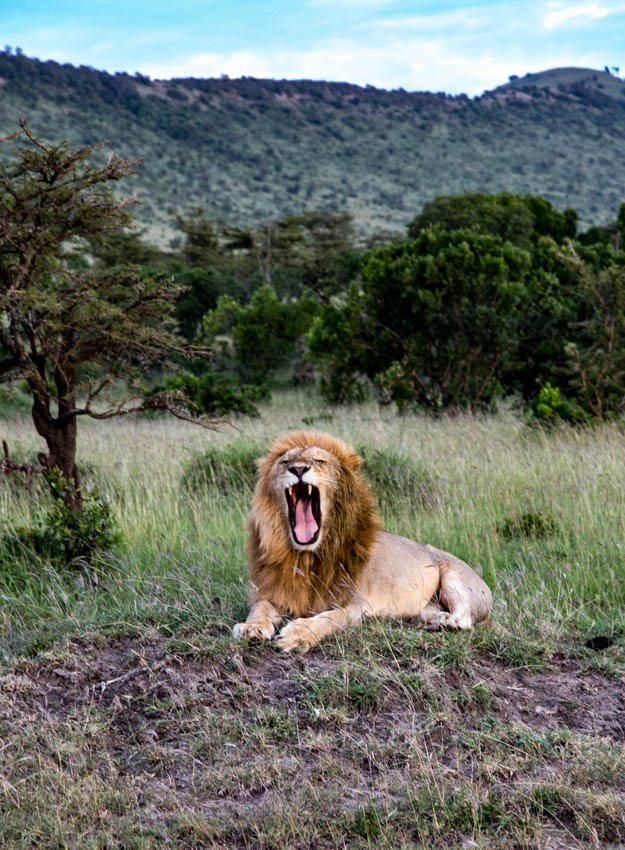