A Matter of Taste – Serving up Paul Liebrandt 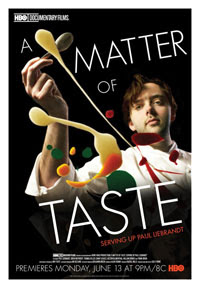 Last  night I had the pleasure of watching an HBO documentary, by Sally Rowe, covering a 10 year span of a young, brilliant chef, genius and innovator, named Paul Liebrandt.  A master at his craft and an amazing artist. Truly a documentary you don’t want to miss!

Paul’s parents divorced at an early age and when asked where his passion for food came from he replies, “I didn’t come from a food background at all. I grew up in London in the early ’80s and I went to boarding school from the age of seven. I didn’t have much of a family life and I didn’t pot peas with my mother or go on the family farm and pull carrots from the ground. I had no food culture and no food aspirations at all when I was a young man. It’s just something I gravitated toward organically. I can’t explain why – I just did. Some people just have something they like to do and if they’re lucky enough, they get to do it for a living.

The documentary starts off with Paul cutting into a pigs head with blood all over his hands, apron and the metal counter top where he is working, while photographers try to capture the action with their lenses. “This is bound to attract investment,” he says. “You want to open up a serious restaurant and they see photographs like this?” Liebrandt asserts, “No way.”

Whether you’re a foodie or not this documentary draws you in from the second it starts.  To catch a glimpse of this spectacular feature, here’s the trailer.

A Matter Of Taste – Trailer from Sally Rowe on Vimeo.

In this 69 minute documentary you learn about the life of this talented chef.  From my perspective he appears to have been a very lonely boy growing up in a boarding school, with nothing mentioned about his family life, who finds a passion for cooking.  He is brilliant, deep and intense, a creative genius, master of his craft, the Calder of food artistry and without a doubt on the cutting edge!  While he mentors those who work under his direction in his kitchen with a stern yet gentle hand, he is the youngest chef-owner to achieve three Michelin stars at his New York restaurant, Corton, with his co-owner Drew Nieporent.

Rather than go into complete detail of this incredible film check it out for yourself on HBO.  It’s 69 minutes that will pull you into the artistic world and inner workings of restaurant life and what it takes to be a master chef.  Paul Liebrandt shows us this through his dedication and exhaustive creations as chef-owner of Corton.