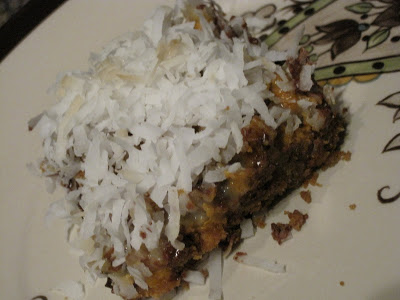 Ever since I was a little girl occasionally I would have this delicious cookie bar but never knew the name of it. It was so good that I’d always want to go back for seconds. However, who wouldn’t with all the luscious ingredients in this delectable bar.

It wasn’t until just recently that I came across a recipe that sounded just like the one I had as a kid. So last night I decided to try and make it. I’m sure many of you have had this and made it before but, not knowing it’s name I never had the opportunity to make the recipe.

It’s called a 7 Layer Magic Bar and oh my goodness it’s to die for!

The recipe can be found in many forms but the original version comes from Eagle Brand Foods.

I can tell you that after making it, the recipe tastes best cold rather than warm, in my opinion. But, you be the judge. Here’s the recipe.

I tried the recipe placing the ingredients in this order:

However, next time we thought it would be fun to try replacing the butterscotch chips with peanut butter chips. Of course the best part of trying a recipe is to modify it to your taste or dietary needs.

I think this would be a great dessert to bring to a party or have at your own. It’s quick and simple to prepare and heavenly tasting!

If you’ve made this before how have you changed the recipe?

This is so yummy I’m certain by days end the entire 9×13 pan will be gone!